Did you know that even the less attractive high rise office buildings in Tel Aviv are full of wonderful surprises. A prime example is  Shalom Meir Tower or  Migdal Shalom as it is known locally, situat 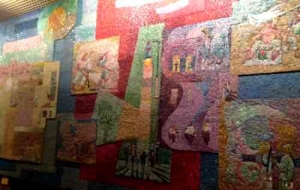 ed just off Rothschild Bouvelard. Shalom Meir Tower houses fascinating and very unexpected galleries on the ground and first floors that should not be missed, certainly if you have a thirst for the history of Tel Aviv.

Although I have brushed by this building on numerous occasions I have never stepped foot in the door. Today was differe 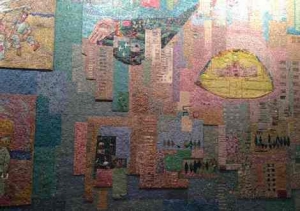 nt. I dragged sweet niece by her designer handbag through a somewhat nondescript entrance and into the unknown. Through the bland commercial foyer, tottering on high heals, we veered to the right and were faced with fantastic feature walls of multicolored mosaics.  These were created by Israeli artisans, Nachum Gutman an artist and children’s author and, artist David Sharir. In this post I shall concentrate on these works alone and explain the other parts of the gallery in another post – lest you get bored…

Well to say I was gob smacked would be a fairly close description of my initial amazement in discovering this treasure trove. To understand my reaction a little better before we move on to the main ‘show’, I shall give you a little history about the building itself before expanding on the magnificent mosaics.

Shalom Meir Tower was Israel’s very first skyscraper constructed a the begining  of the 1960’s and was then the tallest building in the Middle East.  Comprising of a whopping 34 floors and standing  at a height of approximately 130 meters it’s a landmark you cannot fail to see, even if unfortunately in today’s surrounding it is one of the least architecturally pleasing.  This Tel Aviv tower did how 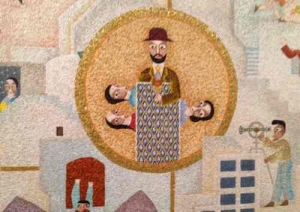 ever mark a significant change within the district of Ahuzat Bayit ( loosely translated as ‘homestead’) becoming one of the most prominent business centers in the country. This high rise building has a neutral cream facade, covered with custom made tiles which were specifically manufactured for the exterior  in Italy. The outside may be a bit of an eye sore by current standards and the commercial foyer pretty bland but quickly forgotten once you enter the galleries.

Back to the mosaics. Nachum Gutman grew up in Tel Aviv and in this splendid, enormous one hundred square meters artwork , he depicts the humble beginnings of the city. The wall is an explosion of color with amazing and intricate detail produced by using o 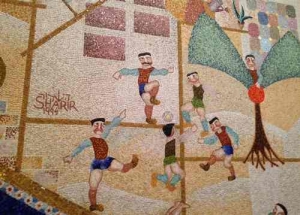 ne million mosaic stones in approximately 800 shades of the color palette. It is no wonder that you need to sit down to absorb the journey, starting from the first section to the fourth.  It’s a little like reading a book without words – the pictures indeed tell a story and stimulate the imagination.The mosaic is split into four parts. Four color stains explaining the Four Periods in the Life of the City. It is kept in muted lighting so your really need to focus one part at a time. Here I have tried to capture the essence of this multicolored stone story…

–The Green Wall -Period One– Old Jaffa, terrace housing, trains, fishing boats and camels. Like a biblical tale with hope including Jaffa executed as the garden of Eden with lush orchards. An Arab gentleman standing  by a pond, whilst a  hardworking donkey pulls the water wheel . Women carrying water jugs on their heads and  steamboats from foreign lands whisking you back to the historic timeline.

–The Yellow Wall -Period Two – As the dominant color, this suggests the yellow of the sand dunes that the city was built upon. The scenes portray neighborhood life, a picnic center, public water pipe, birds, Gymnasia building , the parasol waving town doctor transporte 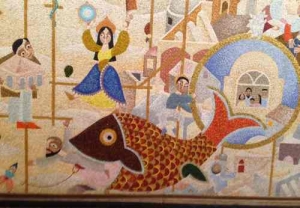 d on a white donkey. A gardener watering a sapling which in shape looks somewhat like an Israeli and finally, an  official  car and sitting room invites us to a peek into the welcoming  lives of the Dizengoff family 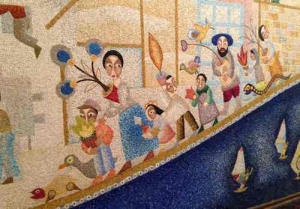 -The Red Wall-Period Three– In center spot the first lamppost surrounded by astonished people, represented in a mystical way with  heads detached from bodies. Three figures portraying the sand dune levelers. Suntanned and without a shirt, the ‘veteran’, red nosed but paled skin, the ‘intellectual’ and the ‘leader’ a well tanned worker with a Kaifya headdress . Musical instruments and a couple carry books, pictures which seems to refer the development of culture, the arts and authors in the city

-Period Four – Tel Aviv in the 1930’s & 1940’s. Tel Aviv in color is embraced by a mother to celebrate its city status. On one of her black sleeves are planes which represent the bombings by the Italians during WW II. The message however is about the rebuilt city, Tel Aviv no longer small but constructed with rows of housing, the port, Hayarkon bridge and wide boulevards.

David Sharir once resided in Tel Aviv but now lives in Jaffa. His equally impressive mosaic, covers about 80 square meters of wall space and comprises of approximately one million tiny glass tiles. These tiles known a Tessere were produced and imbedded in Italy, transported to Israel and design assembled by an Israeli-Italian team in the Shalom Mayer Tower. Sharir’s mosaic unlike that of Gutman’s does not journey through time but is a more personal view of Tel Aviv -Jaffa. On the left side the mosaic he exposes Jaffa, old and new. In the center the Ahuzat Bayit neighborhood and to the left the modern vibrant Tel Aviv.

He illustrates his  story by basing all the elements on what looks like a huge wave, which according to the official info represents “uniformity, continuity and infinity”. For me personally, I thinks it more expresses the evolution of Tel Aviv, the city that does not stop, like riding the waves. Within the piece he repeats  pictures of scaffolding which are appropriate to represent the constant construction taking place in the city. In a whimsical and eye catching manner this more contemporary art highlights daily life, people shopping, hanging out laundry, chatting , swimming, surfing, strolling, influential artists , parades and more. It is vivid  not only in color but in content and I would happily revisit a few times more to study it more!