If you are a theater buff and have a penchant for the stage, let me take you on an expedition to Habima, the Israeli National Theater located in Tel Av 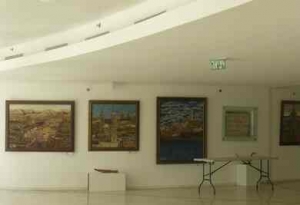 iv. Apart from my other passions, 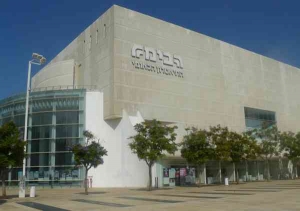 I do enjoy a ‘live’ly performance, be it dramatic, musical or dance. Habima covers the first two rather nicely although generally their program does not include many English productions. However within a calendar month a few performances are with translation so, with a little imagination and concentration plus good eyesight ( or a decent pair of magnifying specs if required ) those of you who only understand English will manage well enough!

I will not deceive you, theater here is not on the level of Broadway or London big budget block blusters, but it is certainly a home for some of the best dramatic performances that I have attended. Creative productions with esteemed local actors have entertained us with not only subjects relating to Israeli/ Jewish culture,  but an array of material which is worldly relevant and equally captivating. Lately, perhaps to attract a new or younger following, the theater has taken to including acclaimed international musicals (such as Evita). These theatrical performances often star local ‘players’ in the key roles who are well known in other sectors (such as popular singers), to encourage this audience to attend more frequently and become the next generation of theatergoers.

Most of the famous names in the country, those that have and those that haven’t, have graced the lobbies, climbed the stairs and sat their bums on the plush upholstered seats of this venue. Flegdling local actor 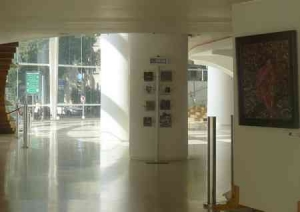 s have grown in popularity and experience to become the hierarchy of their craft whilst exposing their talents on the stages of Habima Theater. 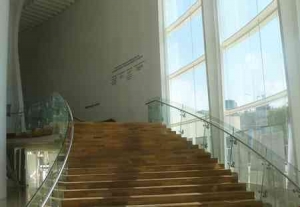 Habima has been operating since it’s opening in 1917 and with the exception of a couple of face lifts during the years has played continuously to it’s loyal audiences. The interior lobby is a play on heights with pillars, curves, and huge windows. Along the walls and within alcoves there are displays of  interesting and amusing art pieces guiding you to and from the booking office.

The building is part of a large and impressive complex which is modernist in it’s architectural l style against the more eclectic neighboring buildings on the northern end of Rothschild Boulevard. The location at the beginning of the Boulevard seems rather fitting for this iconic venue in Tel Aviv, which is notably one of the city’s major cultural institutions. 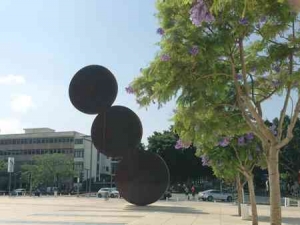 This complex houses the Habima Theater, the Charles Bronfman Auditorium, musical home to the Israel Philharmonic Orchestra and, the Helena Rubinstein Pavilion for Contempory Art.

You will not be able to miss this place , by bus, bike, cab or by foot. Standing proudly at the entrance close to the busy main road but with a backdrop to the tranquil complex and cute cafes stands a shapely statue. The statue of three steel discs,  created by (Jewish) world renown artist Kadishman greets you at the ‘front of house’ luring you in with it’s expression of movement and activity.

If you would like to be one of the crowd or a spectator in a full house and fancy an evening of culture instead of cuisine, do  press  the link below to go to Habima’s web site for whats on.