One of the pleasures of the weekend is to rise gently from a fitful sleep without a brain drilling alarm in the knowledge that someone else will organize a delicious breakfast.
Breakf 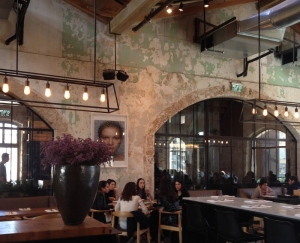 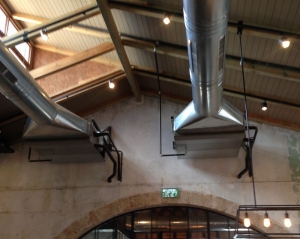 ast in Tel Aviv is a common social occurrence but more so on a Saturday. It’s an ideal time for hooking up with friends and loved ones, without the the usual time limitations and being able to discuss the traumas and tribulations of the week in affable and pleasant surroundings whilst munching on moreish mouthfuls of gourmet breakie food.Last Saturday was just so. Meeting up with extended family for a delectable doubles breakfast at Claro in the Sarona commercial complex.The old Templer building which houses this restaurant was originally the Sarona Winery built in 1886 by the Sarona Vintners Wine Cooperative. The ground floor was used for producing barrels and doubled as storage facility and the upper floor served as a residence. The building still has an underground tunnel which connects to the adjacent winery, which in the past enabled the barrels to be moved from one cellar to another.

This impressive structure has had a number of ownerships and purposes.
In 1925 it became 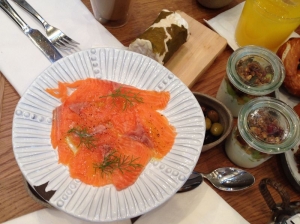 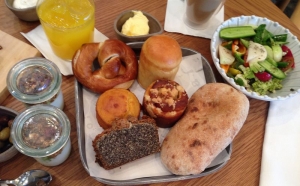 a distillery jointly owned by Segal & Teperberb families, in the1930’s was home to the Rekard printing press, during World War II the headquarters of the British military and later Camp Joshua. In the mid 40’s it  housed the printing press for Hebrew postage stamps and thereafter the Government Printing Office. In 1950, the Bank of Israel was located here and installed a large vault (still in the basement) which safely held Israel’s secure bonds. From 1963 the Mossad ( Israel Intelligence Agency ) used the building and in 2014 it became the the restaurant Claro. Here endeth the history lesson!

When you you enter Claro there is a wonderful mix of old world and contemporary life. The proportions of the building are huge but the interior design has cleverly and thoughtful incorporated modern aspects within the structure which do not detract from the grandness. 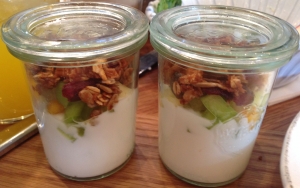 Massive honey wooden beams give the illusion of reduced ceiling height and add colour to the beige paleness of the surrounding stonework and cement .The 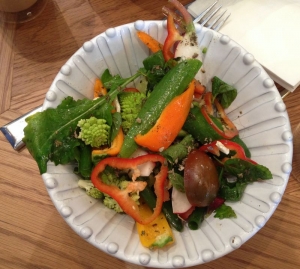 exposed metallic silver air-conditioning tubes give a retro feel and compliment the the sleek, modern style of the pale wooden tables and chairs.The atmosphere has a buzz, hums with the sounds of voices coming together.

People are chatting, children are laughing and the many waiters bustling around