Family members came to Israel for a brief holiday and invited me to branch out of my Sweet Tel Aviv and visit Jerusalem with them. An opportunity to tour the ancient cherished city on a less (barmitvah-less) busy 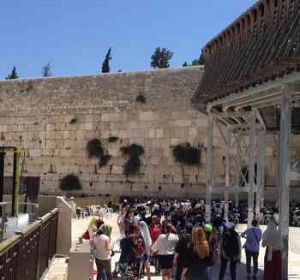 day was appealing so the offer was happily accepted. Since we have all seen most everything several times we made a plan to concentrate on the Western wall (Kotel in Hebrew) and the underground tunnels. 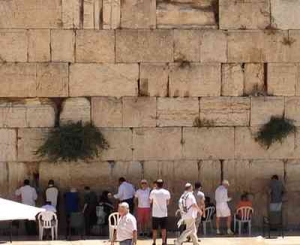 lkways, winding cobbled paths and healthy smattering of tourist shops. Although it retains an atmosphere of super holiness, it has over the years, become more tourist orientated. Amid the narrow sand colored alleyways I noticed  more “Eastern” style restaurants catering for the influx of travelers and a few more trinket kiosks than I ever remembered.

Covering the body parts required to be respectful and honoring our family heritage,  in the late morning beating sun we made our way to the Western Wall.  As always I felt emotional as I approached, for reasons that I can never really fathom logically. Seeing  devote women with heads deep in prayer books and hearts deep in prayer I felt somewhat humbled. Other were scribbling notes on tiny pieces of paper ready to be placed in the minutest crack in the ancient relic of the temple. Will the Almighty grant your wish or mine for that matter? For years we have been touching and kissing this remaining remnant of our history and key to our existence so I guess something must be working , as we are still here to continue the practice! 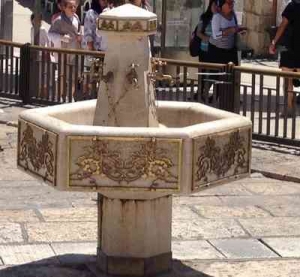 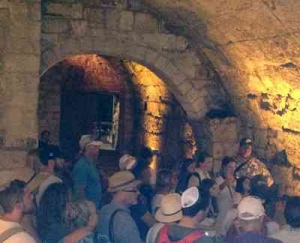 men’s side was less colorful, a somber array of attire with each head covered with kippah or hat, without exception. Heads bowed, knees bent, the gentle whispering of intense and personal prayer. Tefillin counters where old men and young can redo the ritual wrapping of leather straps as they have done since the age of 13 connecting them again to their spirituality .

The Western Wall is still impressive, not for its size which is a fraction of its true length but for the awe it inspires and the collective feeling it arouses. Being a part of something much greater than yourself. ….

We went to explore the tunnels…Wonderful! Sweetly cool, but musky damp air was a relief  after the hard hitting heat of the open. Descending into the depths of the dingy underground to the Western Wall tunnels it is impossible to imagine the grandeur which was once just the vision of one with a narcissistic personality disorder, Herod!

The tunnels run along the Western Wall and are just over 480 meters in length at the present time. This gives one an insight to the building challenges undergone by Herod’s architects and the poor guys that had to construct the walls for this his most ambitious project, the expansion of the Temple Mount. Plus, this was only one of four walls built to support the 1,555,000 square foot plaza where the Temple would stand. To this day even the most intellectual of brains and wisest of wise cannot explain how the western  stones were transported, let alone stacked to a height of 90 fee 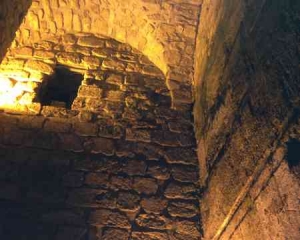 t and depth of

The journey through the tunnels was truly fantastic. Gingerly stepping through the enclosed space touching the huge perfectly carved stones, I could  hardly believe that this was once a section of a magnificent Temple. We stood in a tiny area (now a small underground synagogue ) which is considered to be the closest to the site of the Holy of Holies once on the Temple Mount .Following the way through the narrow tunneling we realized that we were walking through natural rock where the limestone was carved to match the look of the western stone exactly, just amazing.

We finally reached the (stagnant) natural spring water ‘mikvah’ baths where religious cleansing was performed in those bygone days. It is a tradition still continued in these days but in less authentic surroundings (although much fresher water!)

At the end of  this journey we climbed up a short  makeshift stairway towards the bright daylight. We emerged in the Muslim Quarter and began our slow trek back through the bustling souk!