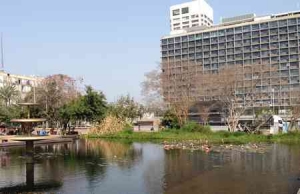 s a tribute to a famous soul I thought I would remind you of Rabin Square in Tel Aviv. An area mostly overlooked except for concerts, rallies or student groups- but never forgotten. I often pass by with unseeing eyes and a brain cluttered with more mundane stuff. Today however without e 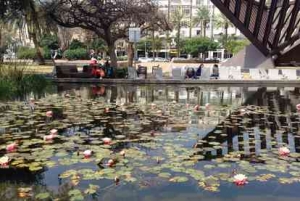 ffort I paced myself and took the time to re-look, rethink and sadly wonder about what might have been…

Rabin Square (Kikar Rabin) is a large public square in the center of Tel Aviv which is adjacent to the City Hall building on the north side. Ibn Gvirol Street lies to the East, Frishman Street to the south and Boulevard Chen to the west. It was designed in 1964 by architects Avraham Yaski and Shimon Povzner

There is a huge metallic, impressive looking memorial sculpture, designed by Israeli artist Yigal Tumerkin in commemoration of the Holocaust victims. This shadows over the more recently renovated pool of slightly green hued water and lilies where people sit to admire the structure or peer in the murky water to contemplate time. The tiered fountain which was reproduced according to it’s orginal design from an old photo, offers a quirky touch. Looking like a layered cake stand used for posh high teas, it gushes water pumped through an ecological system.

Prior to the tragic assassination of Prime Minister Yizhak Rabin in 1995 the area was known as Kikar Malkhey (King of Israel Square), was and still is the site of parades, celebrations, book fares, rallies and various public events. On a regular day however, it is a place where young mothers and proud grandmothers push their baby prams, youths sit quietly with books open and heads serious in study, elders rest up to absorb the wide open 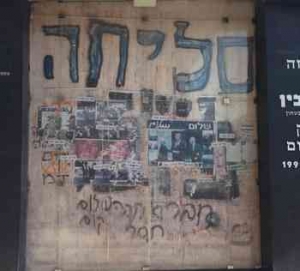 view and life buzz by and bicycles cut diagonally across 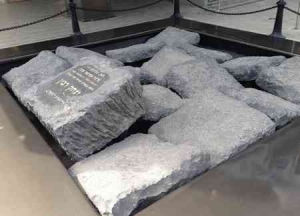 the paved floor to save time in the rush hours.

The square is a tribute to simple urban design, a kind of unobtrusive play with open space but incorporating interesting plots within, often seen but never really viewed.

To the north eastern side of this open square, virtually underneath the City Hall is a unpretentious but heart rendering grey stone memorial to Prime Minister Rabin flanked by three national flags waving in line, like soldiers saluting at their post. Nearby on a small section of the wall on Gan H’air shopping mall, is a graffiti artistically expressing sorrow/ regret at the event (slicha)  bordering a  formal plaque which dates the man and the incident “in the struggle for  peace “. 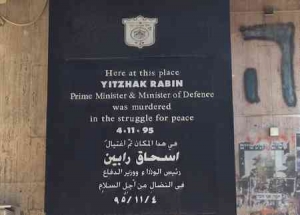 Do take a few minutes to visit, even in passing …