I  became a temporary tour guide for Jaffa Old City ! Although my knowledge is terribly tepid, I attempted to steer  my sweet friends from Europe on a casual trek around the amazing monuments and attractions of this ancient area. Being a few thousand years older than myself and built in the Ottoman period, my stories of the the Old City were limited to those I learned initially via google and later updated on my numerous visits. With all this said, it’s not that difficult to wax lyrical about the oldest  port city in Tel Aviv, so my historical ramblings seem to be impressive e 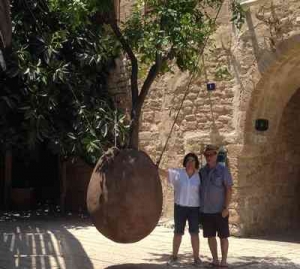 nough to cover a few blind 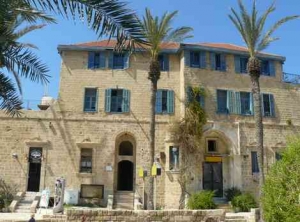 In the blistering heat of the early day sun, we climbed well worn stone staircases both wide and narrow with enthusiasm that comes from as well breakfasted and relaxed stomach. After a very short time and back sticking clothes we realized that we should have bought bigger bottles of water to replenish the liquids we were quickly losing!  As we wandered through the cobbled tapering alleyways we were distracted by the quaint artisan shops, selling intricate jewelry and hand made Judacia, or colorful paintings created by various methods.

The street signs were also a subject of discussion. The striking blue ceramic plaques embedded into the wall stone, each depicting a zodiac sign and named both in Hebrew and phonetic English. We meandered under arched domed buildings with wrought iron lattice work on the windows and peeked into courtyards decorated with potted plants still used by the residents for en 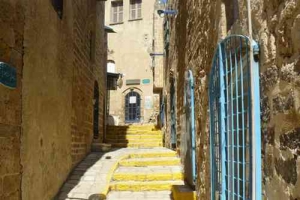 tertaining. With the odors of the past and the dust of newer interior restorations the atmospheres reflected the charm and uniqueness of this  majestic ancient city. Beyond the winding paths my friends  were astounded at themagnificent structures which bear importance to many religions. These buildings are as impressive as  once  they were, each layer of stone an integral part of the solid walls lasting well beyond their biblical construction. The Church (& Monastery) of Saint Peter for example, where through tall double paneled doors one is exposed to the grandness of the 17th century plus the righteous tales of  this Saint.

Strolling through the Summit Garden (Gan HaPisga) we inhaled the aromas of  freshly prepared food from the local restaurants, touched on the visitors center in the old courtyard with it’s take on Napoleon and stood 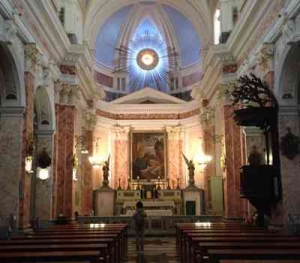 on high to appreciate the superb views along the bright blue coastline…. 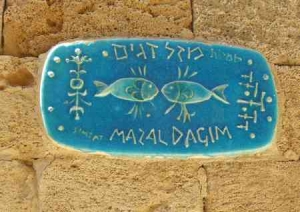