I was enjoying the heat of another bright day by taking a wobbly stroll through Neve Zdedek, in a pair of totally impractical high but beautiful heals, in search of a cafe (and ladies room), when I spott 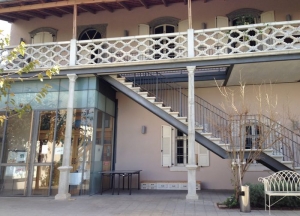 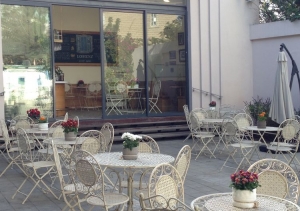 ed a secluded establishment that I had earlier forgotten.

Neve Schechter the center for Jewish Culture and Arts, is an impressive and pretty Templer structure in Tel Aviv with a splendid courtyard enclosed by flowering greenery and willowy trees with a cleanliness and feeling of serenity that is unusual in the city.

The two tier building was charmingly renovated in 2012  and meticulously retains the historic features which ensures that this preservation property is as handsome as it was in the original form.
The history is interesting. The original site was purchased from a local Arab family in 1886 by a German gentleman attached to the Templer sect named Franz Lorenz. The building then became the center for the Templers in Jaffa who named the area around it Walhalla (great hall of fame). Lorenz and family lived on site where they opened a movie house (films in silent versions), an events hall which included presenting theatrical performances and a cafe.

The Cafe Lorenz as it was known, amazingly hosted pro Nazis lectures during 1930’s and ironically in the 40’s, the property was confiscated by the Mandate government 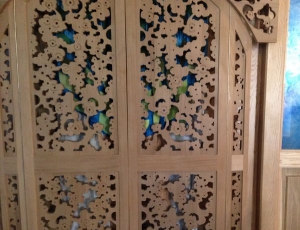 and served as a British Officers club. Fr 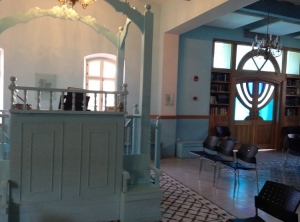 om 1951 until 1975 the Israeli Defense Forces then used it as a Tel Aviv district club house for soldiers. Thereafter the property laid abandon for over thirty years until its restoration by the Schechter Institute of Jewish studies and partner, the Legacy Heritage Fund.

This wonderful building is now home to a creative institute,  focused on Judaism, Israeli culture, religious and secular beliefs, combining traditional learning with artistic media but with ultimate goal of  promoting tolerance and religious

pluralism. The center offers many programs (workshops, lectures, musical performances, excursions)  including those devoted to research and teaching of Jewish Studies targeted toward local educators. It extends it hospitality to the public by offering community activities based on the philosophy of study and celebration.

The almost secret synagogue situated on the ground level is virtually unseen from the exterior except for rich colors of the modern stained glass work inserted in its wooden doors. The spacious interior has been lovin 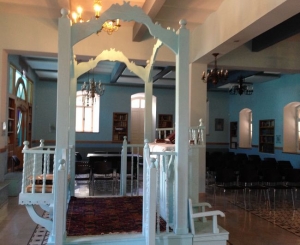 gly restored including the blue painted wooden podium from where the Torah is read, the thick stone pale blue walls which hold full bookcases, arched windows with wide wooden ledges and a dado rail which acts as decoration and a visual  illusion to reduce 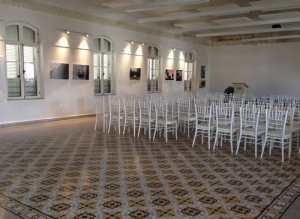 the ceiling height. Mid floor is tiled in a repetitive lattice pattern to emphasize the importance of the area and embedded in the wall, the ornately carved wood cupboard which serves as the home of the sacred scrolls.This is an egalitarian synagogue of the Masorti Congregation of Neve Zedek.
The courtyard boasts a large cafe (on the site of the original) with a forefront of delightful almost Parisian wrought iron cafe tables and chairs which hint at the European past. Definitely worth a leisurely visit, a coffee sipped in the surroundings of bygone years and a little chill time in a calming atmosphere.
I understand the Neve Schechter Center can be used for private events or parties, certainly ideal if you wish to entertain in a lovely location which is not only historic but kosher too.
♥Neve Schechter
42 Chelouche St.
Events and workshops: www.neve-schechter.org.il
Mail: office@neve.org.il
Frances2017-04-05T12:00:50+00:00February 6th, 2015|Categories: Art/Culture|0 Comments