It’s definitely Hanukkah 2016 in Tel Aviv!  As I leisurely stroll through the city, there is a mountain of Hanukkah paraphernalia. Tel 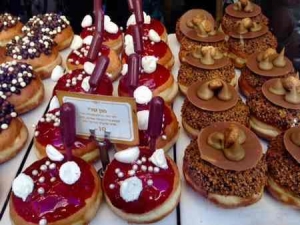 Aviv famous for its delightful bakeries has outdone itself this year! I hardly know which flavor donut or sufganiyah as known locally, to select. Failing to make a key decision like this is fatal for the figure, but hey it’s only once a year. So, when I visit my basic bakery or my favorite posh patisserie in Tel Aviv I am tempted to taste them all! You can imagine that I am building up to be quite a doughnut myself! Hanukkah 2016 in Tel Aviv, has become a creative competition in baking skills, with each batch of sufganiyot more inventive than the next. It’s really surprising what can be achieved with doughy balls. Either they are exquisitely decorated to sweeten the palate, or used a the bun to a burger!  We may be true blue & white but when Hanukkah comes around we are full of celebratory colors! This Hanukkah2016 will be no exception.We will celebrate this festival in style, here in Israel 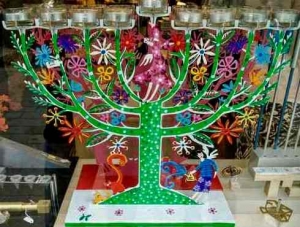 and with all the Jewish nation across the globe.

Apart from the delicious donuts, crispy fried potato cakes – latkes and candy parcels for the craving kids, what is Hanukkah? Aside from the spinning tops or dreidels as otherwise known, what does the festival represent? Why is it each year we light the eight candles on the Menorah (candelabra with nine holders) All these rituals for Hanukkah, are to commemorate our devotion and re-commitment to the Holy Temple in Jerusalem. It is the time that we  remember the period of the Maccabean Revolt against the Seleucid Empire. It is the time we happily recall the triumph of light over darkness.

At the time of the 2nd Temple, the ruling Greek dynasty accepted the Jewish Torah as a book of wisdom. Unfortunately, they refused to acknowledge it’s significance to the actual Jewish faith. The Greeks decreed that learning the Torah was forbidden and seized all Jewish property and possessions. A further abuse of their power and disrespect for the Jews was to place idols of worship at the Holy Temple (Beit HaMikdash). The Jewish people without homes or hope were afraid to stand up against this tyranny. One brave man Mattityahu and his sons, the Maccabees were not. Against all odds, the Maccabees fought back and drove the cruel oppressor from the Holy Land.

During their occupation, the Greeks had defiled the Temple and made the oil impure. Fortunately, the Maccabees uncovered one jar that had been overlooked but, which contained sufficient oil for one day only. Their unwavering faith again gave them courage, so they lit this last jar and released another miracle. The oil burned for eight day 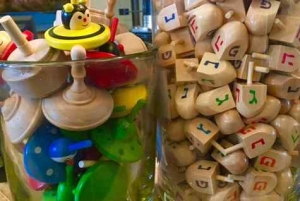 s! This was cause for great happiness and with daily life restored and the Temple cleansed, the Jewish faith became even stronger.

Hanukkah 2016 will be observed for eight nights & days commencing on the 25th day of Kislev in the Hebrew calendar. This occurs on the secular dates of 24th December 2015 until 1st January 2016. During this period that we are reminded of these miracles. The small band of heroic Jews against the great Greek army, the one jar of simple oil lasting for eight days. It is because of these extraordinary events we celebrate our freedom from the darkness to the light. We honor Chanukah by kindling the lights (candles) of the Menorah, one for each evening throughout the holiday until we reach the final night. Each of the eight candles is lit with the ninth, known as the ‘Shamash’ (he who attends) and is placed either in the center of the menorah or in a distinct location to separate it from the rest. Then we do what we’re great at, we party, eat, sing and play with dreidels!

Happy Hannukah 2016 may the Festival of Lights be with you!